The water supply company of an city in north-west China has commissioned KSC to build a remotely controlled system for monitoring of the water quality. The water quality is measured by measuring probes supplied by the company s::can.

The main tasks of the system are retrieving, storing, visualization and delivery of data from s::can measuring probes. The following individual components are used:

The SCADA will show real time data from the water company, for example the water level of a water tank. The SCADA system also receives data from another SCADA and the water quality measurements from the s::can probes. For this purpose, an interface application is needed. It serves as the interface between other components and the SCADA system.

All programming was conducted in C# with Microsoft Visual Studio 2008.

A reference of the implemented classes can be found here.

Visualization of the measurements

In the application, three different visualization libraries are used:

ILNumerics.net
ILNumerics.Net is a class library for mathematical problems of all kinds. It is open source (download from http://ilnumerics.net) and in C#. It provides n-dimensional arrays, complex numbers, linear algebra, and fast Fourier transformation (1 to n dimensional). The most important features for Watervis are the visualization controls. 2D and 3D graph types are provided. All graphic output is conducted with OpenGL, so the output is hardware-accelerated and very fast.
More information...

Microsoft Chart Controls
Since the autumn of 2008, Microsoft has offered Microsoft Chart controls for .net 3.5 in a free download. It supports 25 different chart types. Windows.Forms applications and ASP.NET sites are supported. The output is handled with DirectX Library, thus it is hardware-accelerated, but not as fast as ILNumerics.net or GAV.
More information...

GAV GeoAnalytics Visualization
The GAV framework from the University of Linköping in Sweden was developed primarily for representation of geographical, time-varying and multivariate data. GAV supports interactive influence on the output. All output is conducted by DirectX. GAV is very suitable for mass data because of its speed.
More information... 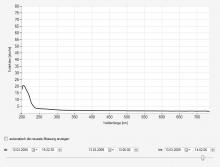 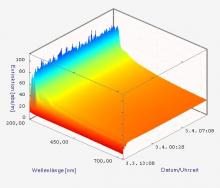 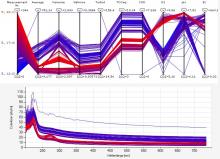